NEW YORK, NY – A new report finds that New York City’s private sanitation companies operate garbage trucks with high rates of faulty brakes, bad tires, broken signals, and unsecured cargo, which endanger workers, pedestrians, and other street users. The report, authored by the Transform Don’t Trash NYC coalition and Transportation Alternatives, recommends that the City bring accountability to this industry through a commercial waste zone policy and other measures. The report, “Reckless Endangerment: How New York City’s Unsafe Commercial Garbage Trucks Put Us All at Risk,” can be downloaded here. 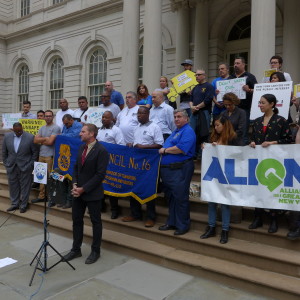 “Private sanitation companies deploy thousands of unsafe trucks every night to service customers along crisscrossing routes, recklessly putting trucks on the road with faulty brakes, improper headlights, and broken turn signals,” said Brigid Flaherty, Organizing Director of ALIGN, a member of the Transform Don’t Trash NYC coalition. “As our report shows, most of these violations are given high severity ratings by the US Department of Transportation, meaning they significantly heighten the crash risk. We know that the private sanitation fleet drives more than the Department of Sanitation, traveling an estimated 12 miles per ton of waste collected, compared to just four miles per ton for the City-owned fleet. Commercial waste zones will bring enforcement and accountability to a highly dysfunctional and unsafe private waste system. Not to mention the fact that zoning will create more efficient routes, which means less truck mileage and fewer opportunities for crashes to happen.”

“New York City can only reach its goal of eliminating traffic deaths and serious injuries if private waste hauling companies make their trucks and operating practices safer,” said Paul Steely White, Executive Director of Transportation Alternatives. “When workers report problems with vehicles, fleet managers need to act quickly to make necessary repairs. We also need metrics to track every crash involving private waste haulers, along with guidelines for when to take punitive actions against companies. Private waste haulers should be setting the gold standard for safe operation in the Vision Zero era.”

The report also found that 96% of the safety violations committed in the past two years by the largest haulers in New York City were concerning vehicle maintenance, while only 3% were related to driver fitness and 1% were related to unsafe driving. Sanitation workers interviewed by researchers said that their complaints of unsafe trucks go unheard.

“Every night there are garbage trucks weighing over 40,000 pounds driving the streets with bad brakes,” said Carl Orlando, who has worked for multiple private sanitation companies. “You complain but the boss doesn’t fix it most of the time. In other industries drivers are expected to inspect their trucks before they drive, but in this industry the bosses just don’t care. I’ve been sent out in trucks with bad brakes or bald tires. I once had to stop my truck by crashing into a light pole because the brakes wouldn’t work. Workers care about the safety of everyone on the road and that is why we are speaking out for safety in private sanitation.”

The groups recommend that New York City take steps to improve safety practices in the industry. They call for the City to establish exclusive commercial waste collection zones, which would allow for greater enforcement of safety standards and decrease truck traffic through more efficient routes. The report also recommends the City strengthen regulations for safer vehicle design and to improve transparency and accountability for companies following crashes.

“As New York City’s union of commercial drivers, the Teamsters see it as our duty to raise safety standards to protect all road users,” said Sean Campbell, President of Teamsters Local 813, which represents private sanitation workers and is a member of the Transform Don’t Trash NYC coalition. “Too many sanitation companies recklessly endanger their workers, as well as anyone else on the road, when they neglect maintenance and put these trucks on city streets. Workers have to choose between keeping their job and driving an unsafe truck. We need the City to require safety of these companies because they are not going to shape up on their own.”

“New York City’s commercial waste industry is currently engaged in a race to the bottom, prioritizing profits over worker safety,” said City Council Sanitation Chair Antonio Reynoso. “Although the Council passed legislation in 2013 requiring upgrades to private sanitation trucks by next year, many businesses have yet to comply. Instead, the trucks continue to deteriorate, which is an issue not only for the workers, but for all pedestrians, cyclists, and other drivers in the city, especially those in North Brooklyn, the South Bronx, and Southeast Queens, where the majority of the city’s waste is processed. I want to thank the advocates for drawing attention to this issue today, and I commit to continuing to work on meaningful reforms to the private sanitation industry that prioritize safety and sustainability.”

“Every day the commercial waste industry ignores basic safety measures, putting thousands of NYC workers and pedestrians lives at risk,” said Council Member Brad Lander. “Operating under a system that lacks accountability, these trucks are on our streets with faulty brakes and broken headlights. If we are serious about the City’s Vision Zero agenda, we must hold these employers accountable to keeping their trucks and our streets safe.”

“Trucks that are not maintained from waste stations diminish the quality of life for residents and create unsafe conditions for the workers who drive them,” said Council Member I. Daneek Miller. “This report shows exactly why the waste transfer industry needs a complete overhaul. I would like to thanks ALIGN, Transportation Alternatives, and all the advocates here today for ensuring that we have a safe and clean way to handle the city’s waste.”

“No excuse can be made for employers that put hardworking New Yorkers in dangerous working conditions,” said Council Member Corey Johnson. “These employees have difficult jobs that they carry out every day to keep our streets clean. They deserve the highest standard of safety. Motorists who share the road with these vehicles also deserve safe conditions, and they too are at risk when these sanitation vehicles are unfit for the road. I thank the Transform Don’t Trash NYC coalition for shining a spotlight on this important issue for the safety of our City.”